In the Autumn of 2015, the Clinton Central School Board of Education with the support of Superintendent Dr. Steven Grimm announced that a Girls’ High School Hockey program would be launched under the auspices of the high school.

The team would feature Clinton girls and skate in maroon and white as the Warriors in the Clinton Arena but also include talent from neighboring schools New Hartford, Whitesboro, Rome Free Academy, Proctor, and Holland Patent, as well as several others. Opponents were teams from around New York State, primarily from the North Country; so it meant long bus rides doing homework, eating late dinners, and icing bumps and bruises while building lifelong friendships.

The team was primarily funded through private donations and sponsorships to offset any additional tax burden. The local hockey community generously rallied with cash and other necessities to allow the girls the realization of a dream generations of female hockey fanatics had shared — to skate out with cheers, support, and recognition as Varsity athletes. 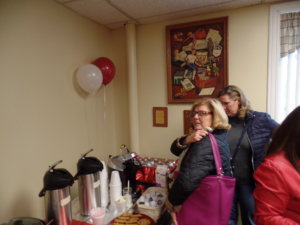 Clinton Central Board of Education members Amy Burns Franz ’82 and Megan Burdick ’83 in the ‘Green Room’ prior to the Warrior girls hockey debut at the Clinton Arena.

The Warriors take their place on the blue line following warm ups for the introductory ceremonies featuring local dignitaries and VIPs. 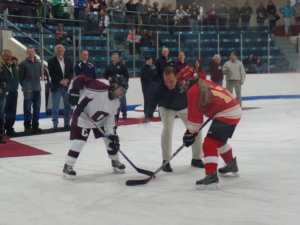 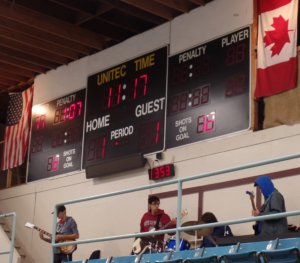 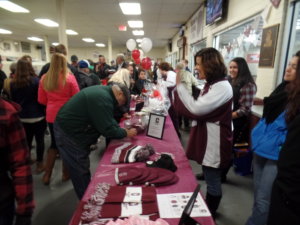 Clinton & other area hockey fans were sold on Girls Varsity Hockey and snapped up merchandise in support of the team. By the 2016-2017 season, the Girls would be competing in the Section III Finals vs the more established Skaneatles Lakers. Best wishes for continued success to our Clinton Warriors as they create their own 100 year stories.