Hugo ‘Hezzie’ Van Camp grew up on Kellogg Street during the 1920s and alongside his friends and  schoolmates caught the ‘hockey bug’ upon its introduction by the coach’s son, Albert ‘Bert’ Prettyman, Jr.

Van Camp was a talented skater who became a member of the first Clinton High School hockey squads. Although no photos of Van Camp playing hockey survive, his boxing acumen led to a post-graduate career as a professional fighter known as ‘Jackie Flowers’. Over a six year Middleweight career, Flowers fought 60 bouts and earned a 40 (31 KO)-15 (0 KO)-5 record. He would later serve in the US Army during WWII.

Flowers/Van Camp passed away in 1988. 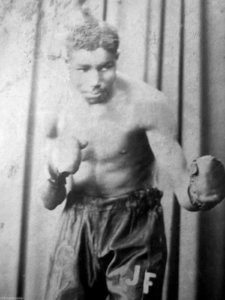