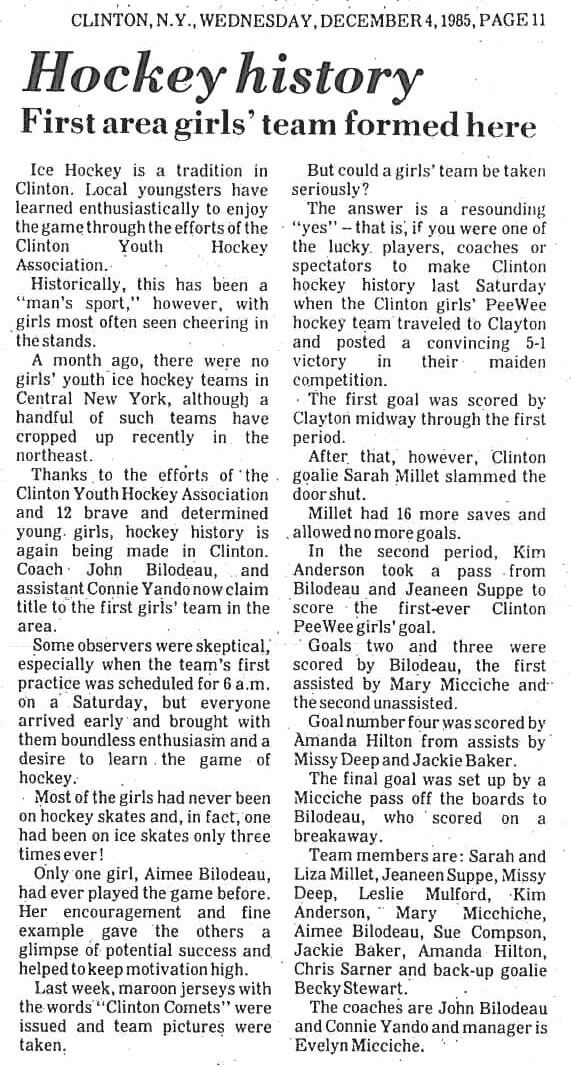 Girls Get Their Start

At the Mite hockey level, one of the first—if not the very first—girls to enter into Clinton Youth Hockey was Aimee Bilodeau. She learned and started skating at the Arena in Clinton’s figure skating programs. But starting in the 1979-80 season, she asked to switch into ice hockey at age seven. Hence, Aimee became the leading poster child for girls playing hockey in the area. Girls would now enjoy learning hockey from top-notch coaching, with traditions derived from the Clinton Comets professionals using the same rules, procedures, ices, and teams as the boys.

Exactly what really enticed this young girl to “break the ice” in Clinton is later explained in a newspaper article posted in the Utica Observer Dispatch in March of 1982. This article (see image) explained why she broke the ice barrier into boys hockey. A few years after first joining the program, Aimee, at age 10, became the very first girl to be chosen to play for a Clinton all-star hockey travel team, the 1981-82 Squirts coached by Jack Kane. Outside of Clinton, there were also three other Central New York travel teams that had girls: New Hartford, Rome, and Syracuse.