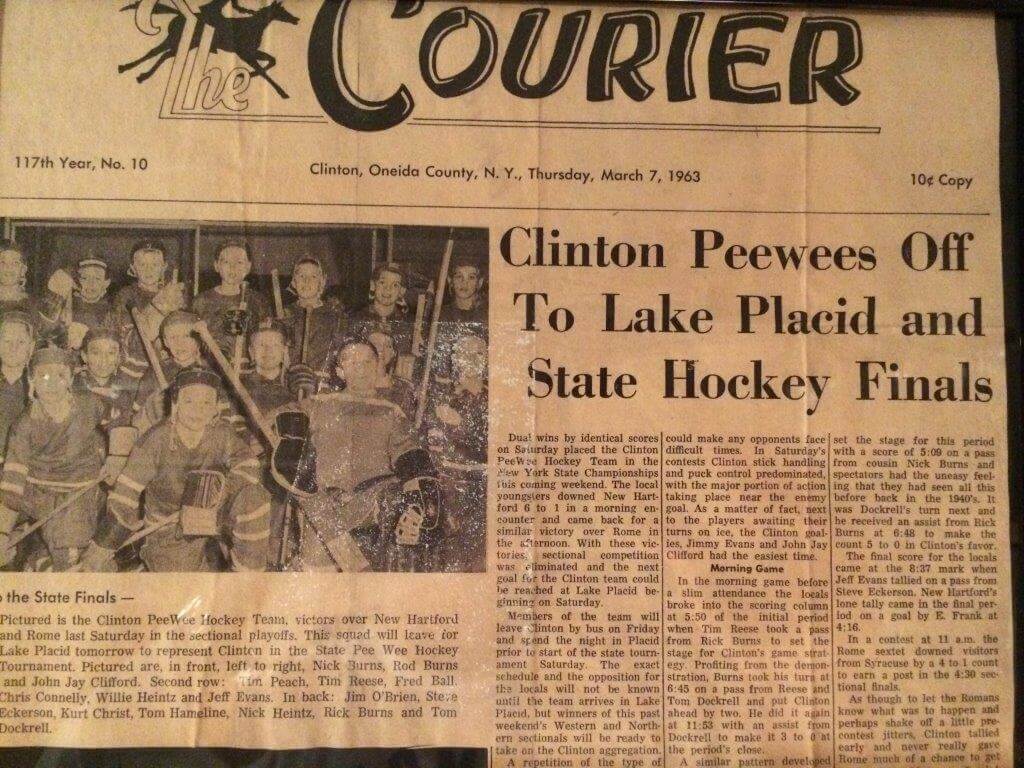 There is a 1963 Clinton Courier photo (to be downloaded separately) as part of the front page lead story of the Clinton pee-wee all-star team, which was headed to Lake Placid for the State Championship. There were other tournaments in my pee-wee and bantam years, but this one is most memorable because it was our first overnight road trip, and we were to compete for the New York State Championship. We were beyond excited!

In the first round, we were quite humbled by a better Buffalo team. It didn’t help that most of us were psyched-out by the huge size of their skaters during the warm-up, proudly flaunting brilliant red jersey’s which had the super-cool Pepsi bottle-cap logo on the front emblazoned with “Buffalo” instead of Pepsi. These guys looked and skated like pros. They clobbered us—I believe 6-1, or so. We thought we were hot stuff coming into this tourney so we were shocked and bummed.

However, after a few hours of hanging out at the Marcy Hotel pool, our disappointment was washed away. Coach Tom Dockrell and our parents certainly helped with their encouragement, too. We played Canton in the consolation final, which was a close game. I think we tied them.

Before this big tournament, our Clinton pee-wee world existed mostly on Saturday mornings playing local teams sponsored by VFW, Hose Company, Hook & Ladder, and other local businesses. I recall some of the dedicated coaches who led our teams like Dave Isles, Bruce Weaver, and Skip & Doug Slawson—all who were CCS varsity hockey alumni. Then Saturday afternoons, the all-star team would head out to play Hamilton, Rome or Ithaca, to name a few.

I also recall the ceremonious “Pee-Wee Night”. It was a big deal when all the local teams would compete once a year on a Friday night. Parents, grandparents, and other family and friends would attend. We imagined we were the Comets playing before a big crowd. I remember WKTV being there, and later that night they showed a clip of Bob Meelan and me in a one-on-one. It was our “Len Speck/Jacques Faubert” five seconds of fame. I beat Bob and went in for the score, then played it faux-cool like this happened all the time. What a hot dog!