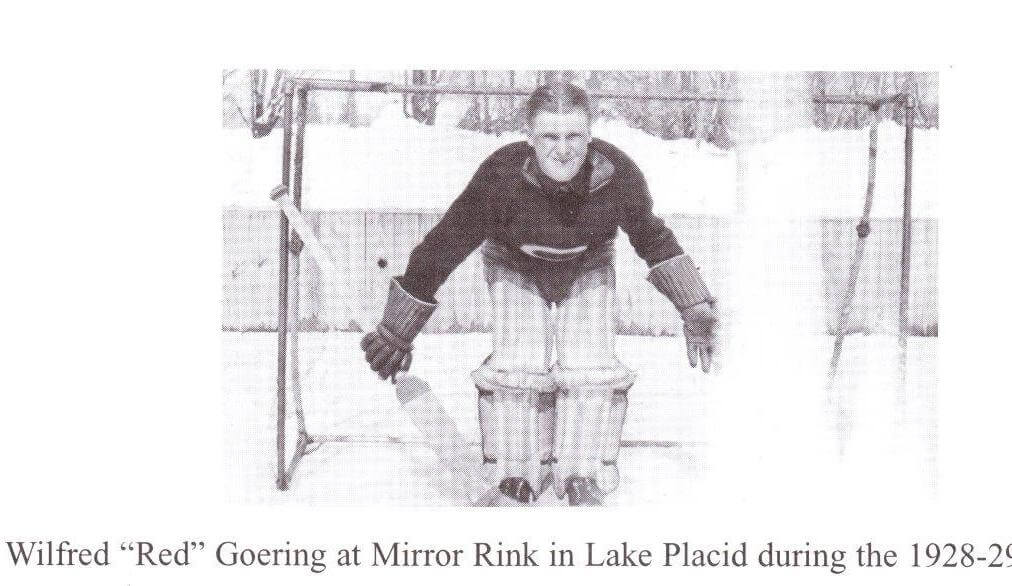 I started playing hockey in 1959. At that time “Red” Goering ran the Clinton pee-wee hockey program. This was a big deal to me at 8 years old, never having held a hockey stick. When I walked into the rink for the first time that Saturday morning, the smell was odd. In retrospect, I would guess a combination of Tubby’s popcorn, post-Comet games’ beer & smoke, the rink’s refrigeration system, and a pinch of BO. I tentatively walked through the lobby to the open seating area for skaters. Players walked by me…big kids 12 or 13 years old with their skates on, clad in uniforms—giants…intimidating.

It was opening day for hockey, so everyone was directed to sit on the benches in the skater’s lobby. It was packed with kids, from one end to the other, probably 80 feet end-to-end. Presiding over us was “Red”. He was unmistakably THE man: mid-50’s, standing confidently, with thinning red and grey hair slicked back and piercing blue eyes peering through tortoise shell glasses. And even though he was greeted with absolute silence, he spoke with a borderline shout to ensure that each player there would precisely understand every word he said.

I only recall the gist of his speech. Mostly, it was about the organization, how it was run, what we could expect—and the rules. Those rules….as he recited each one of them and the consequences for not following them. His fiery blue eyes would occasionally fixate on players who were inattentive…or perhaps had committed infractions the prior year. Geesh, now having seen “Cool Hand Luke”, Red’s tone was kinda like a prison warden. But there would be no failure to communicate here. He truly put the fear of God in me.

Red was wrapping up as the crowd began to get restless, and then he paused to say:

“And one more thing!” The room went still again. “There are lots of you kids here who’ve left equipment laying all around. It’s YOUR job to keep track of it. But remember…if any of you see a stick laying around—it’s probably someone else’s. Leave it. Because if a kid comes to me crying that he lost his stick, and we search for it only to find you’ve got his stick—BIG trouble. And if I ask you where you got that stick, do NOT reply that ‘I found it’. DO NOT EVER TELL ME YOU FOUND A STICK BECAUSE YOU DID NOT FIND THAT STICK. THAT STICK IS SOMEONE ELSE’S, AND YOU TOOK THAT STICK! AND THAT’S STEALING! AND IF YOU STEAL HERE, YOU’RE OUT! DO I MAKE MYSELF CLEAR?”

Red’s formula for order seemed to work. I do not recall any hint of disorganization throughout my pee-wee/bantam years—and we all had a blast playing there. My brother, Rod and I, and our cousins Nick and Dave would arrive at the Clinton Arena on Saturday mornings before the doors even opened at 7 AM. One Saturday when the doors weren’t open by 7:00, I had the brilliant idea of traipsing down the street a few houses to where Red lived to get him out of bed. None of us had the guts to knock on his door. Plan B: we planted ourselves across the street on a snow bank and yelled for him. No response. Then another bright idea: We would sing to him. We made up a simple song using the four organ chords from the rallying song of NHL teams.  And we took a chapter from Mrs. McBride’s music classes in which Rod and I would sing the 1st  verse, and then as we began the 2nd  verse, Nick and Dave chimed in and repeated the first verse….over and over and over. “Red, Red, Red, Red…..Red, Red, Red, Red…..Get out of bed, bed, bed, bed….bed, bed, bed, bed”, until finally Red lunged out his front door. Those fiery blue eyes were full of utter shock and dismay. It was the first time in my life I heard a whisper-shout, “What are you kids doing!” We were the proverbial dog who found the bumper (and thankfully not a hockey stick). “Well…we just wanted you to get out of bed to let us in, Red,” we mumbled. Looking back, how could he be mad at 4 little kids who loved hockey as much as he did at our age. “Okay kids, hold on to your hats. See you shortly.” What a relief!