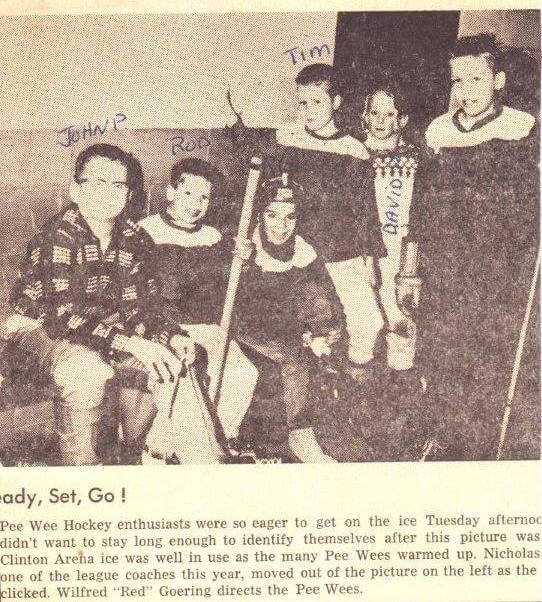 Unless you’re a Clinton Baby Boomer, you would not appreciate the importance of the backyard rinks in Clinton during the 1960s. The winters then were incredibly cold and snowy. When the first snow held in late November, chances were it would stay on the ground until late March. It was a ripe environment for do-it-yourself backyard rinks.

Our family moved from Harding Road to College Street, close to the village, in the fall of ‘58. It was about then I learned the Peach family traditionally set up a rink in their backyard, which of course was way cool. But I quickly learned that this required a lot of work from us. The Peach boys (Bobby, “Thumper”, Timmy, and “Davo”) had a system. Bobby, the oldest, explained, “Just pack the snow with your feet up and down, moving side-to side”, until the 75’ X 25’ surface was finished. I didn’t quite understand what was going on so I just followed instructions. Not fun. Many hours. Boring. Feet frozen. Tired. It seemed like the task would never end, and what we were making looked nothing like an ice rink. I started to have doubts. “Trust me Rick—you’ll see,” advised Timmy. After the packed shell was finished, Bobby sprayed it to build an ice crust. Then, multiple days of watering built layer upon layer. Sure enough, in less than one week—voila! Beautiful backyard ice rink—amazing!

And for the next four months, the entire neighborhood was playing on that rink each day, every free moment we had. My routine was to rush home from school, hastily throw on my gear, and head for the Peaches’ right away. I remember walking down Hamilton Place one afternoon hearing sticks, blades, and shouts in the distance. I was so missing out! So the rest of the way I sprinted as my stick and skates clicked and banged. Once there, it was my own personal race to see how fast I could lace up my skates to maximize ice time. Funny how habits stay with us….now, almost 60 years later, playing adult league hockey, I naturally find myself rushing to put on my skates.