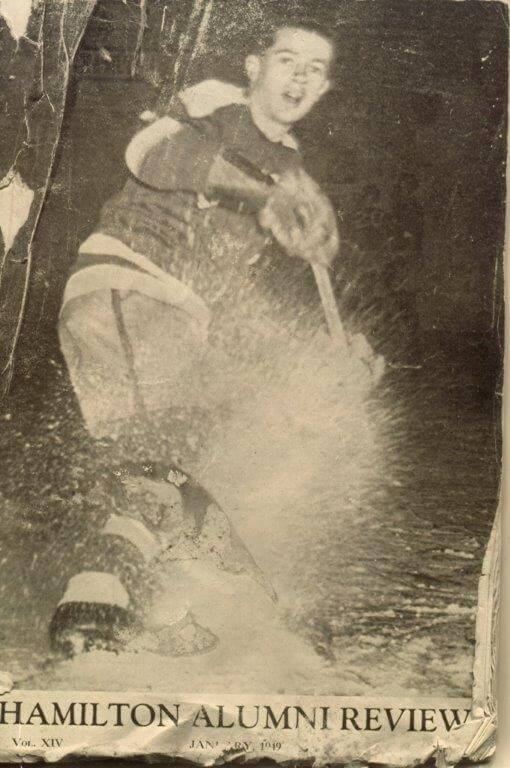 A photo of my Dad in the 1948 Hamilton Alumni Review magazine was taken just prior to the season beginning. He was captain that year. Without my Dad’s love for the game, who knows whether my brother Rod and I would have ever been bitten by the hockey bug as we were.

Dad started me out at the Sage rink in 1955 at age four. I remember my first time there—struck immediately by how cold that rink was, and totally exasperated trying to stay up on my feet let alone skate. Despite my Dad’s patient attempts to teach me, I repeatedly fell. Within a short time, I decided my comfort zone was to camp out at center ice, where my Dad declared “Fine!”, and he let me be.

Toward the end of that skating session, he took me for a ride around the ice. Though I struggled on my own, it was much less of a problem holding on to his hand and gliding under his power as he zoomed around the ice. I suppose in retrospect, this was kind of like an introduction to the amusement park rides I would experience years later at Sylvan Beach. How cool was this—flying around the rink, whizzing past everyone. This sure beat sitting at center ice! But once the ride concluded, the realities of stumbling-bumbling returned, and I resumed the position.

My beginner’s stage continued for the next 3 years at Sage, grinding through group lessons. I remember learning the “plow”—hated it. Took forever to learn, it seemed. But the trials and tribulations were worth it, especially with hot chocolate served in the Sage tunnel at the end of each lesson.